When pursuing a quest to check out as much UNESCO world heritage sites as possible, one occasionally comes across some unexpected scenery. For example: a 19th-20th century coal mining site, such as the one in Essen (Germany). I must admit we were a bit prepossessed towards an industrial site, as we are nature-lovers with a heart for the environment. And industry, well, it just doesn’t match our way of life. Nevertheless, this site surprised us because of its history and remarkable architecture.

Built in the 19th century and completed in 1932, this industrial plant bears the signature of the Bauhaus art school. Moreover, the metal construction of its exterior and interior has a certain architectural beauty to it. Its architecture is, however, not the only appeal the mine has. The site has a long history, in which its mining methods evolved as technology developed from hand picks to mechanized coal cutting. The complex breathes 135 years of history of its work ànd its workers. 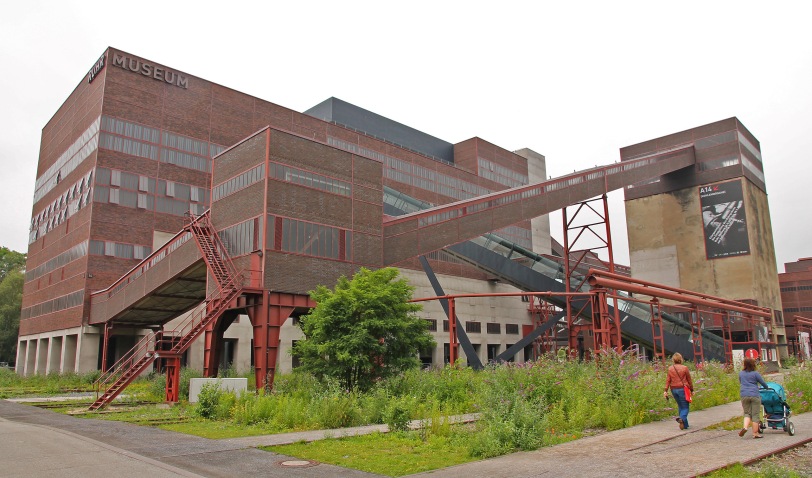 Building A14: the coal washery.

Old metal in the coal washery.

Given we were traveling with our 4-year old daughter, we split up. Annick and Febe went for a walk on the site amongst the buildings (and in the rain), while Maarten joined a guided tour in German. Consequently, we will also split up this post in two parts.

I had arranged beforehand to join a guided visit of the site, accompanied by our local friend, historian and 20th-century specialist Sandra. She helped me out to fill in the gaps in my German understanding, although I must say it went remarkably well to understand the guide’s explanations. The fact that Dutch (my native language) and German are very much related obviously helped me here. 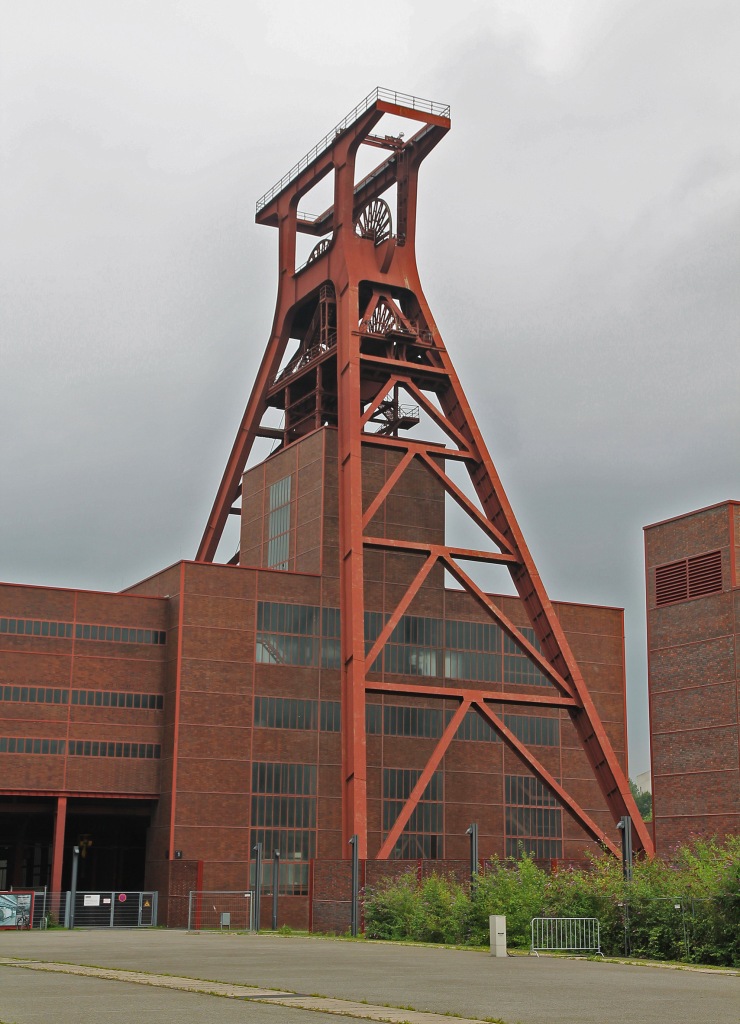 The winding tower of Shaft XII.

We assembled in the former coal washery building (Shaft XII, building A14). We gathered around a miniature representation of the whole complex and after a short introduction, we set off on our tour. We passed the winding tower of Shaft XII to arrive at the Honour Court, where our guide explained the importance of the imposing architecture in this area, used to impress visitors at the main entrance. From here, we had a perfect view on the Bauhaus Boiler House and its surrounding workshops.

The winding tower, nicely integrated in the Bauhaus architecture. 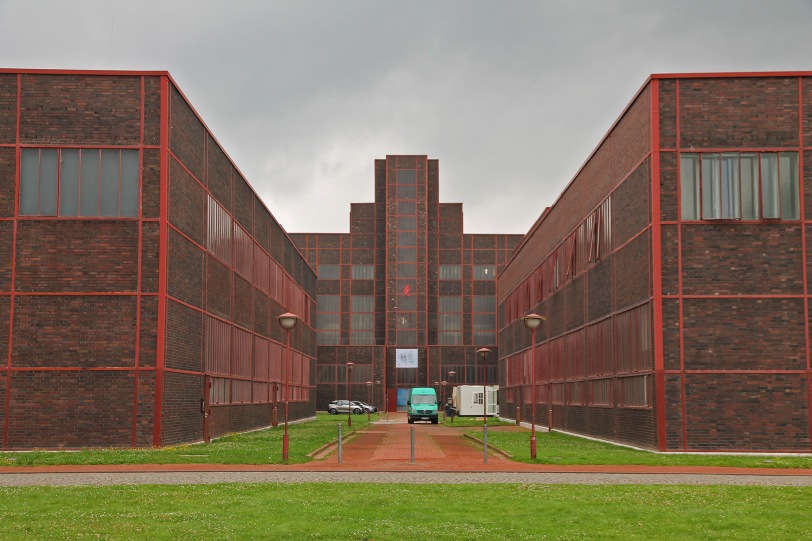 Boiler House and surrounding workshops, as seen from the Honour Court.

From there, the tour continued inside the buildings. It was a haunting experience to pass the rusty coal mining carts on their dusty tracks and to gaze upon an impressive collection of sturdy machinery, once loud and overactive, now cold and silent. It was an unknown world to me, but it had such an authentic feel to it that it immediately aroused my interest. Moreover, the combination of shapes, lines and colours of the interior made it almost like a piece of art.

An old coal mining cart on its dusty track.

Mining carts in the old workshop.

More mining carts: for me this was both history and beauty.

Next to getting to view the material from up close, the greatest benefit of following this guided tour was the impressive amount of information we were given, and the creative way in which it was presented here: along the road, images, animations and original films were projected on walls or pieces of machinery, backing up and visualising the guide’s explanations on history and function.

Projection on old machinery (and our guide).

Next to this, our guide, a former employee of the mine, also shared with us his personal insights on working conditions in those times. 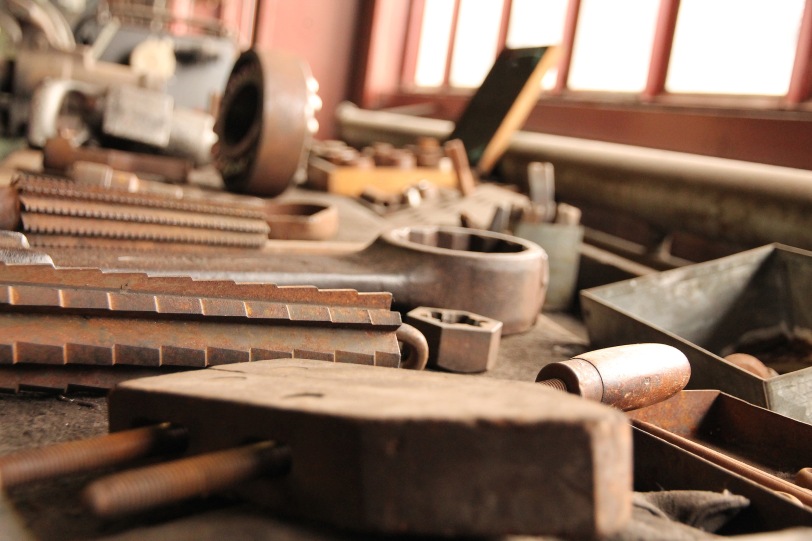 Tools at a workshop.

The traditional German miners’ greeting: “I wish you luck in opening [a new lode of ore.]”

St.-Barbara, the patron saint of the miners. 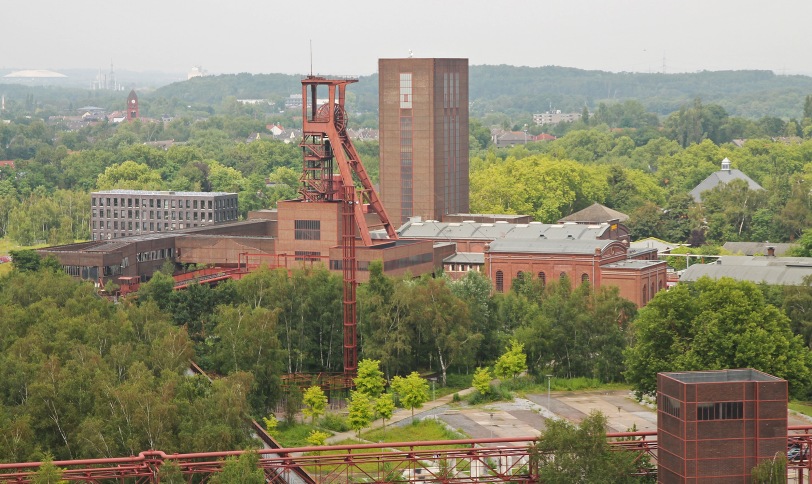 Top of the winding tower of Shaft XII.

The area in between the buildings is just perfect for a stroll. Although the plant was shut down 28 years ago, it is still a very active place, as it is being used for art exhibitions and the like. A playground for small children has also been installed, although the installations were a bit too strange and abstract for our little girl. Nevertheless, the area’s most important assets are the remains of railways, pipelines and other machinery. It gave me a real Tomb Raider feeling and Febe loved to play with everything she saw. I think it really excited her imagination as well.

Febe and a miniature plan.

Nature and industry hand in hand? 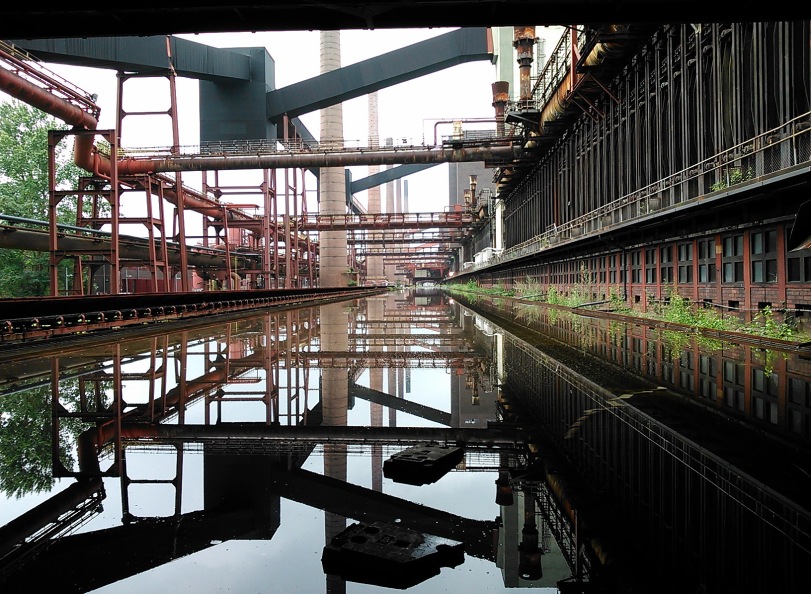