During the 1920s and 1930s, the French painter Jacques Majorelle designed and constructed an extraordinary botanical garden just outside of the centre of Marrakesh, with the help of a local ethnobotanist. The result is stunning! The son of an Art Nouveau artist, Jacques was fascinated by colours such as the very strong cobalt blue, which he used extensively on buildings, walls and tiles in the garden. 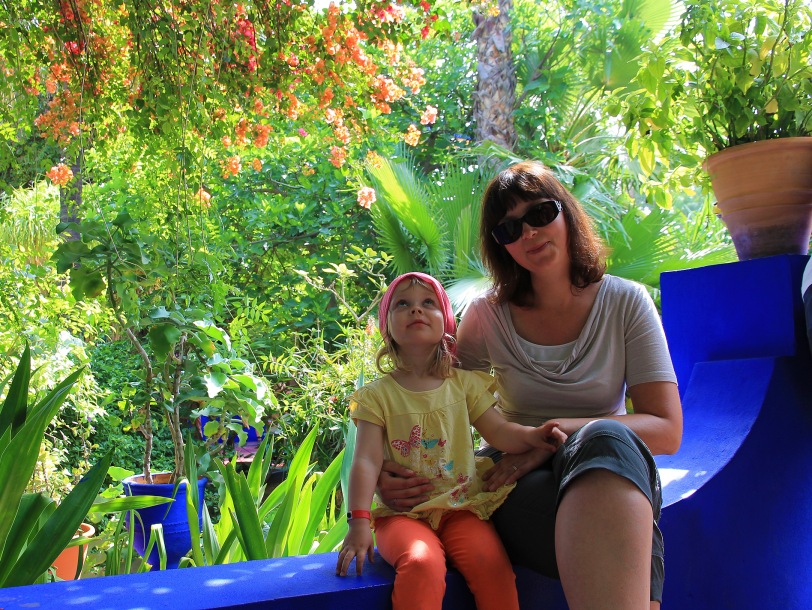 Relaxing amidst the cobalt blue 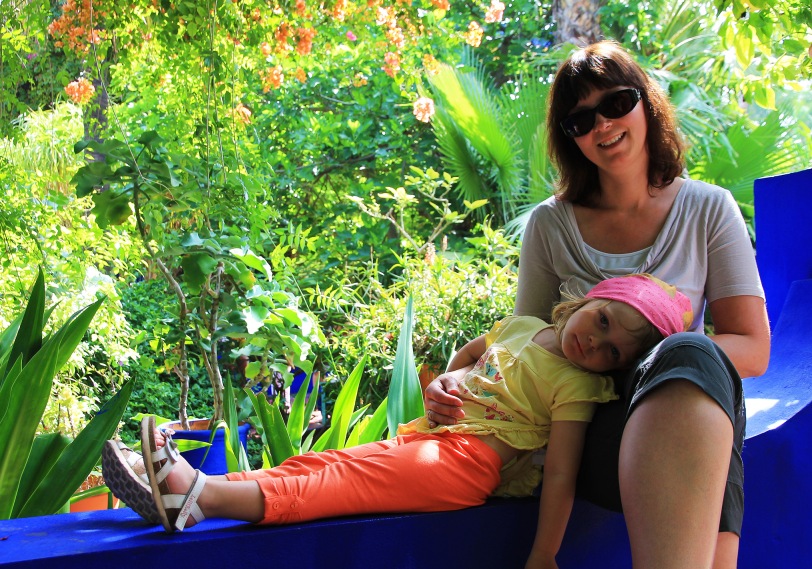 Majorelle’s garden itself is a walled garden of Eden, with a focus on palm trees, bamboo, cacti and a selection of flowering plants to add even more bright colours (e.g. giant pink, red and white Bougainvillea). 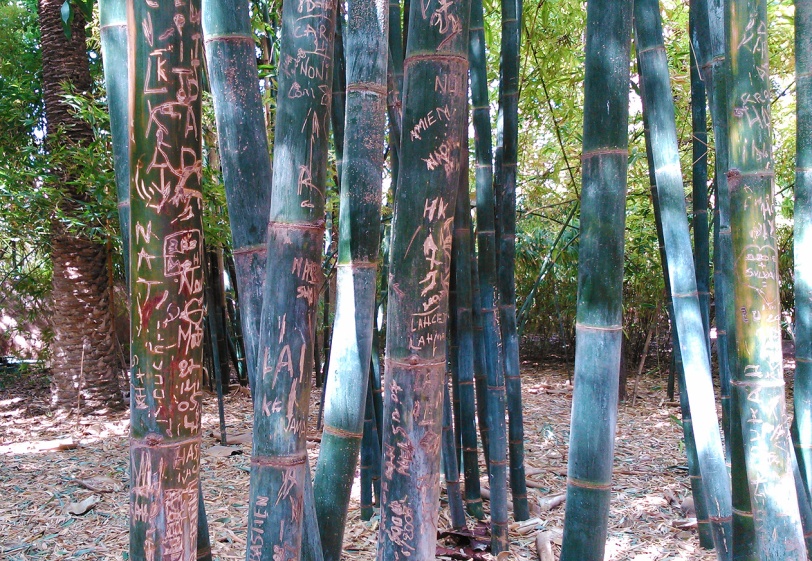 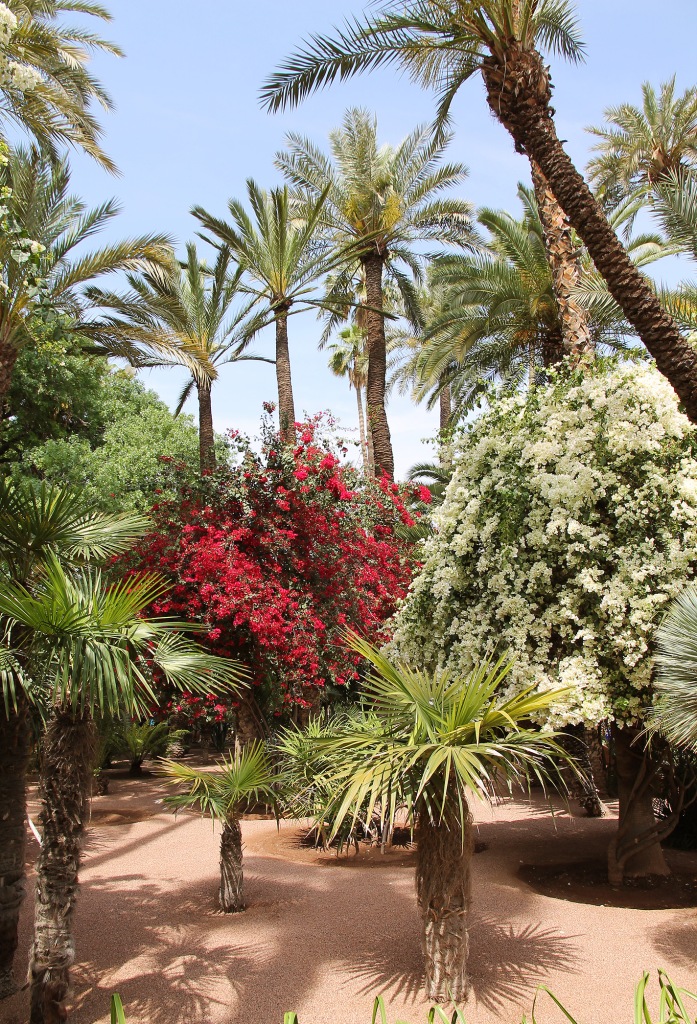 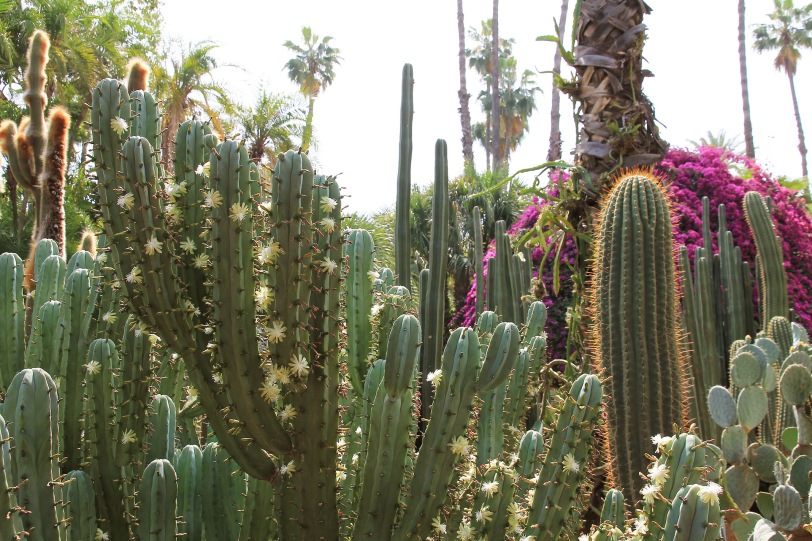 To us, the combination of a natural environment and those bright colors seemed to work well. The garden also displays a clear equilibrium between man-made structures (walls, buildings, pottery…), plants and water features (a pond, a canal, a small waterfall…). 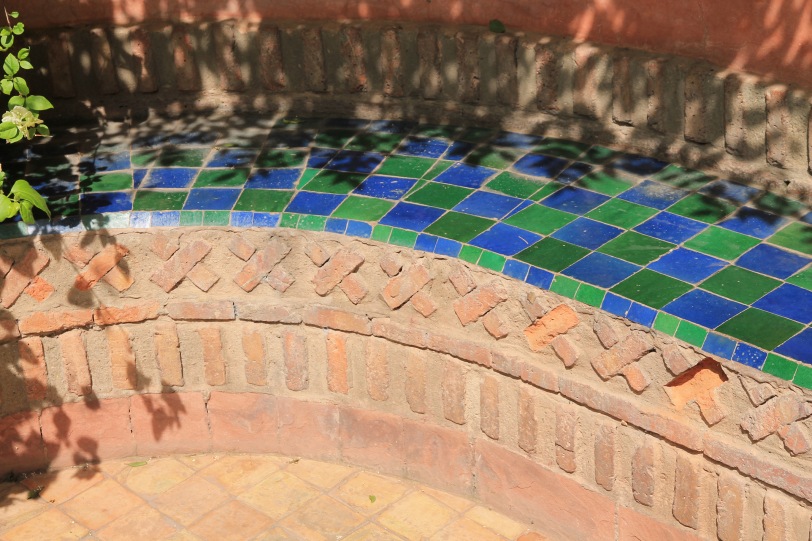 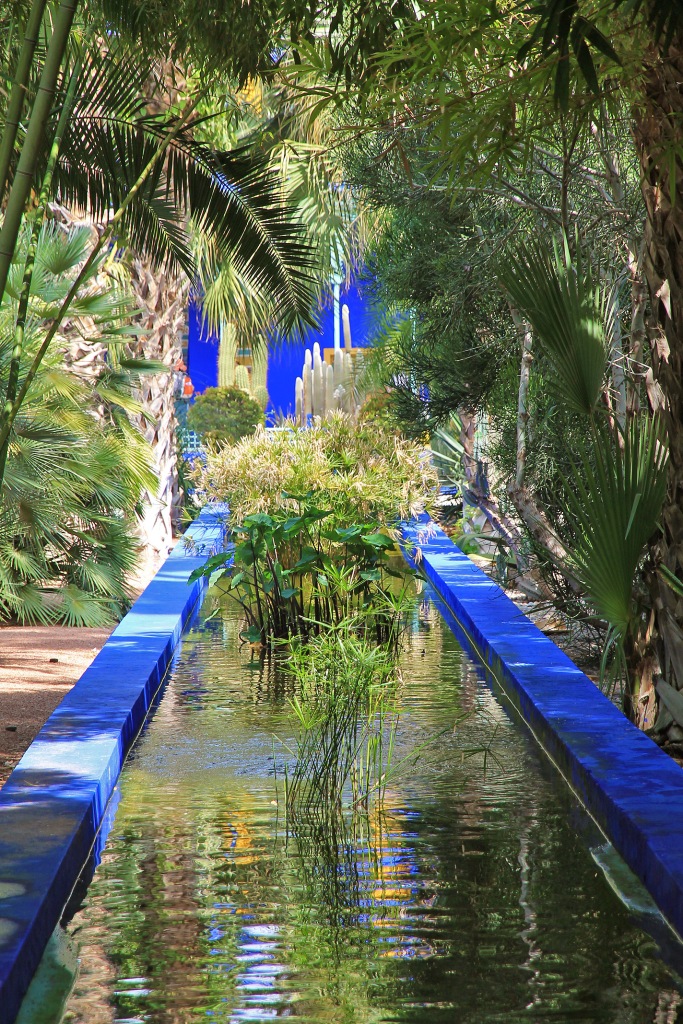 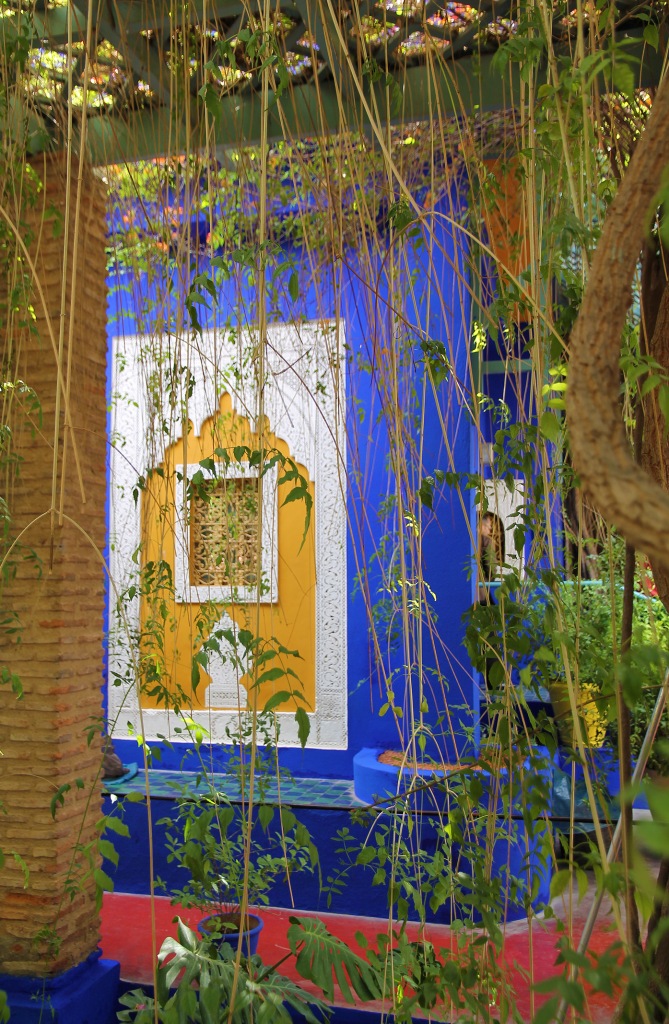 A man-made structure in a natural environment 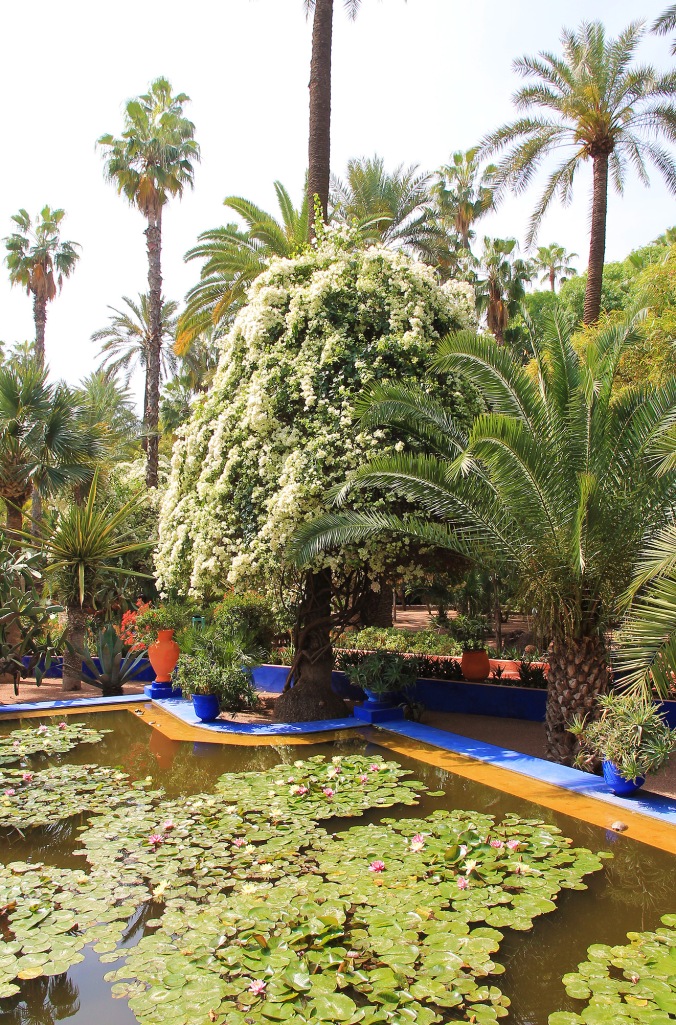 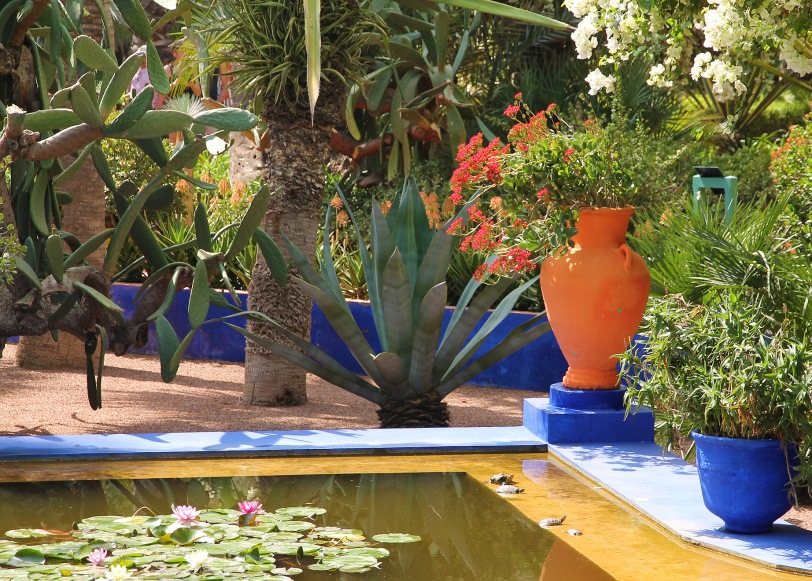 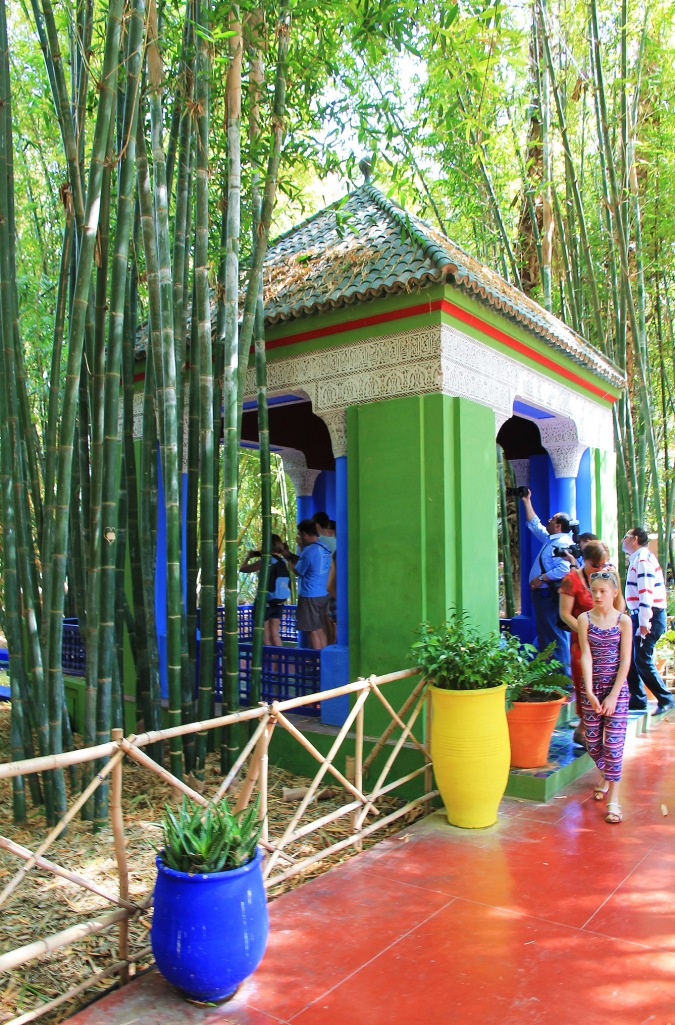 The most strikingly blue construction is the central villa. 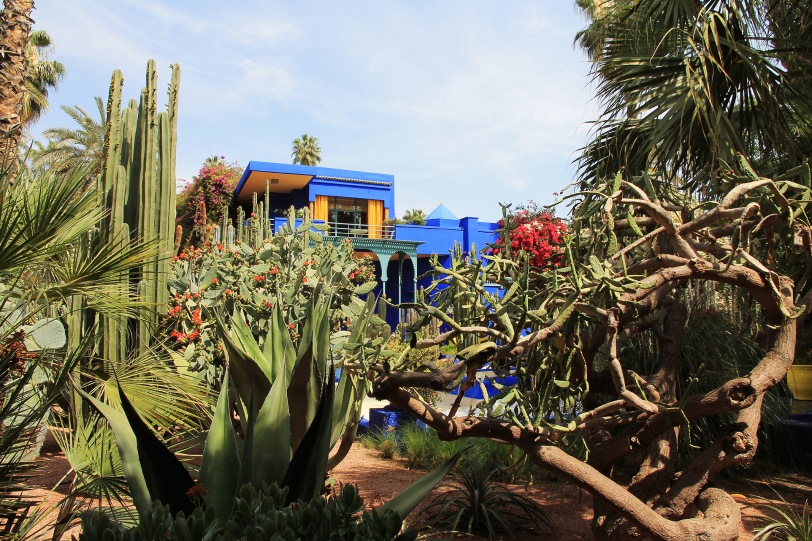 The villa, behind cacti 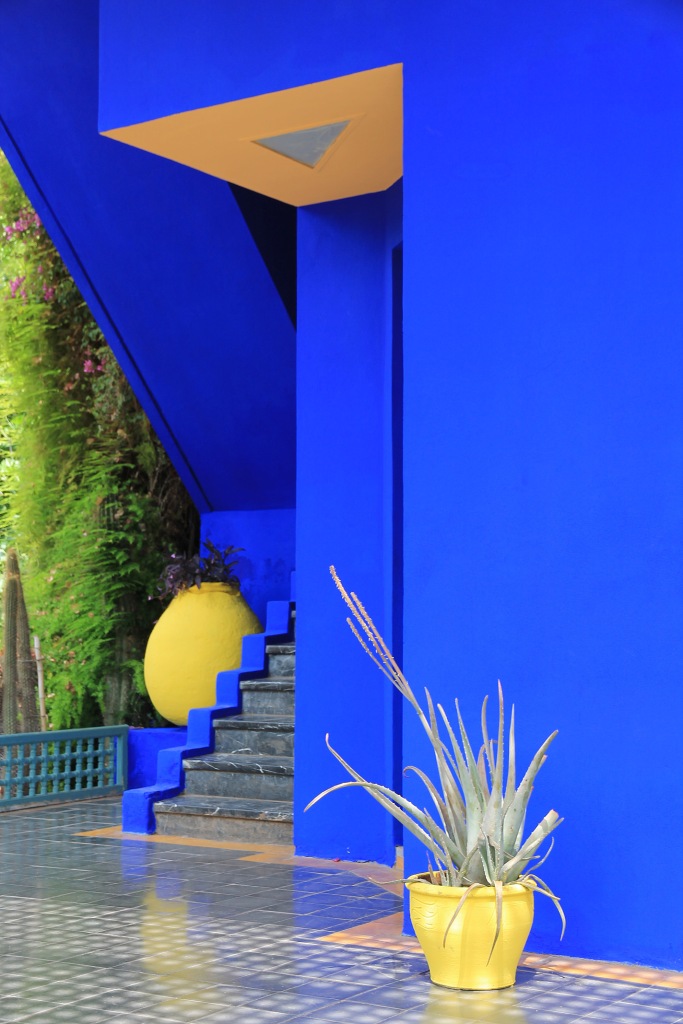 The villa is an expressionist painting in itself… 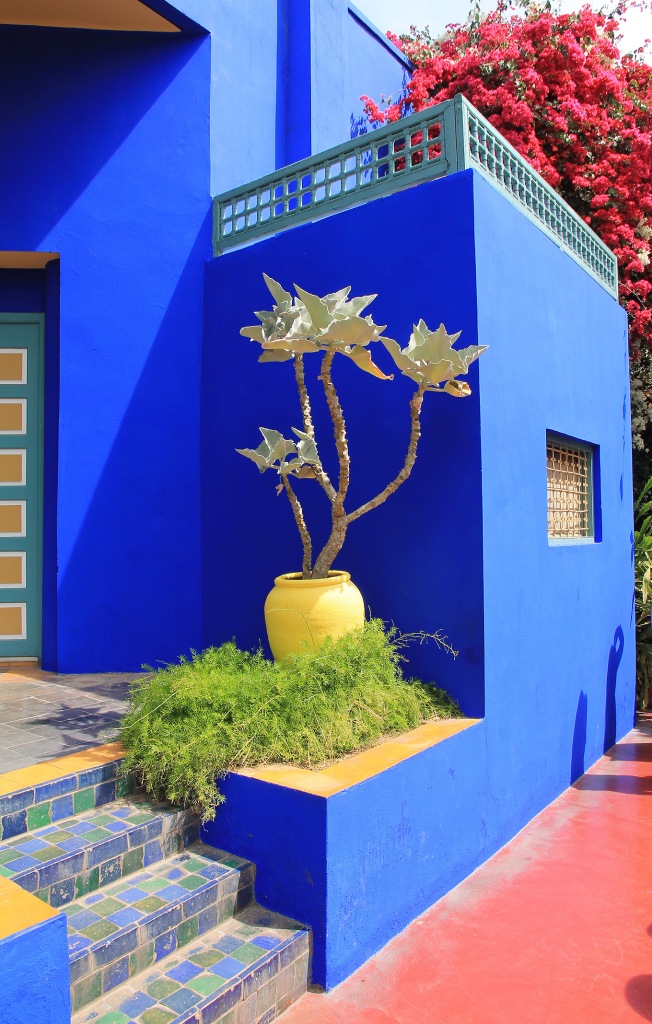 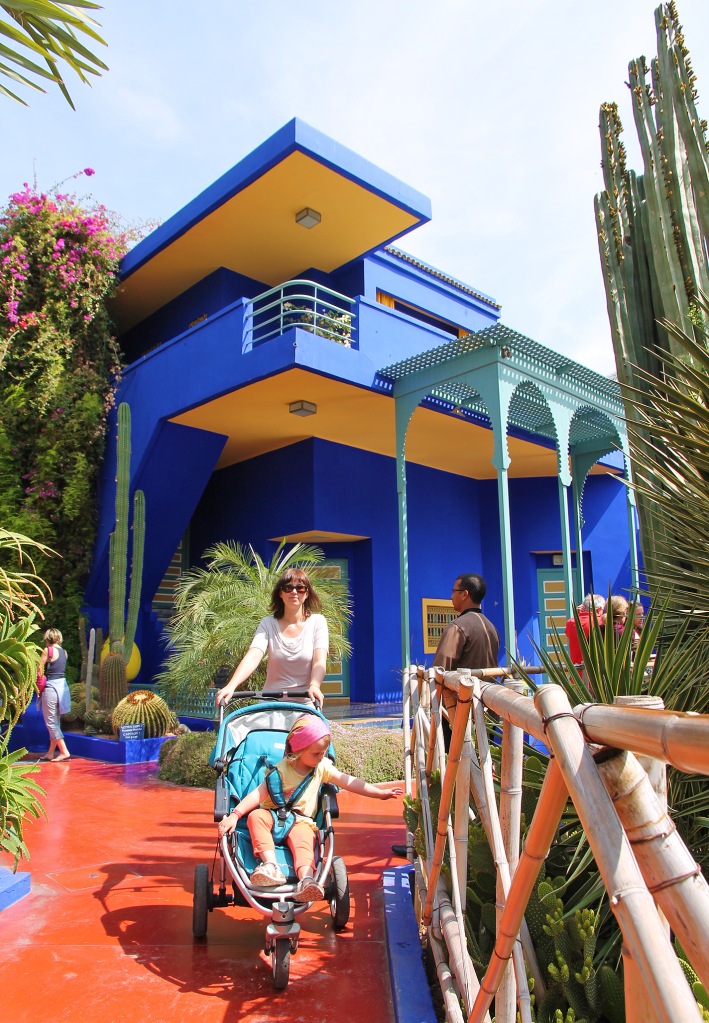 Two girls and a villa 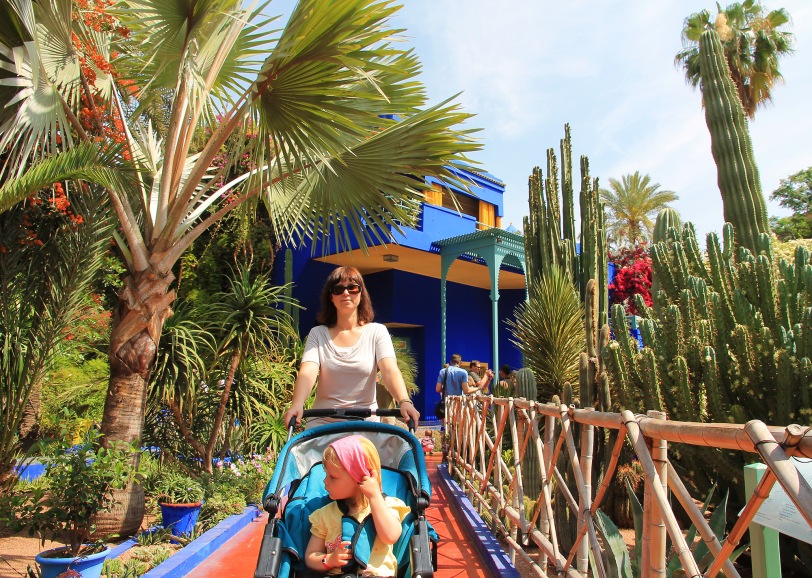 The girls and the villa, again (can’t get enough of this!)

In 1964, the fashion designer Yves Saint Laurent re-discovered this colourful spot in Marrakesh. Together with his partner, he ensured maintenance of the garden with respect for the original concept ánd kept it open to the public. When he died in 2008, his ashes were scattered in the garden. There is a small memorial sign in the garden, and the street in which the garden is situated is also named after him. 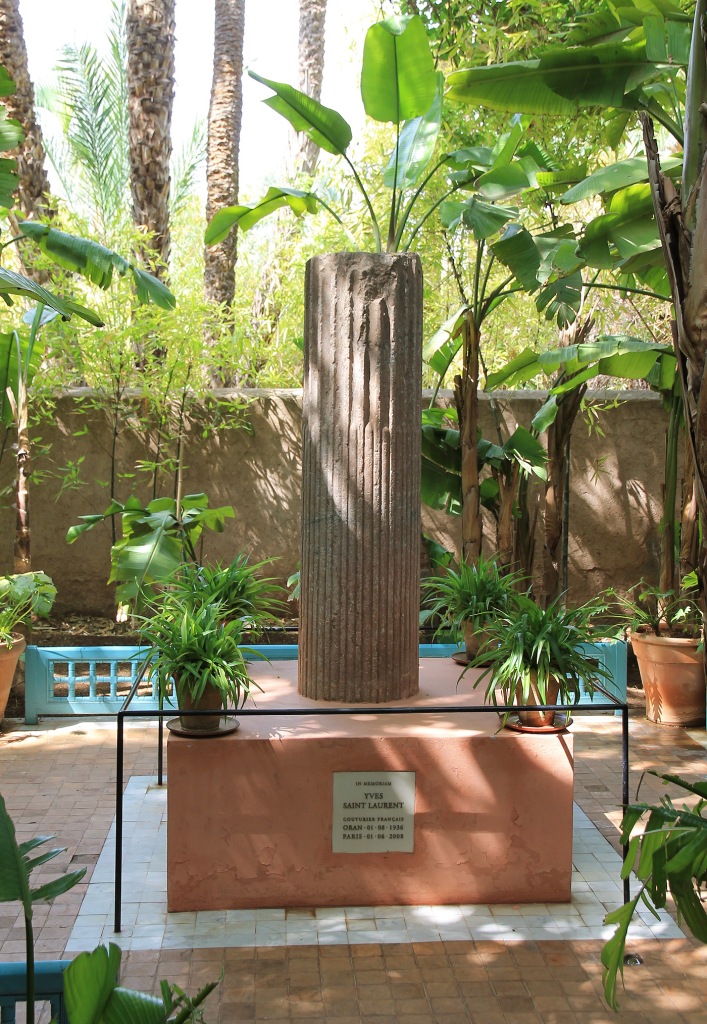 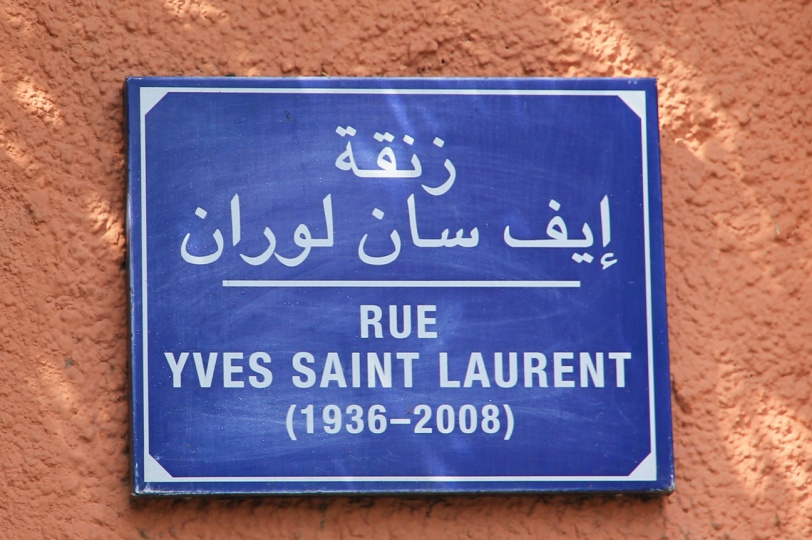 Despite the constant flow of tourists, it is still a place of tranquility, ánd an inspiring one for a novice photographer! We gave Febe our all-round camera (Canon Powershot) to use freely in the garden. The resulting pictures are often brilliant and demonstrate her own exceptional point of view. We decided to dedicate ur next blog post to her pictures of the Majorelle garden (this will be for next week, hopefully). 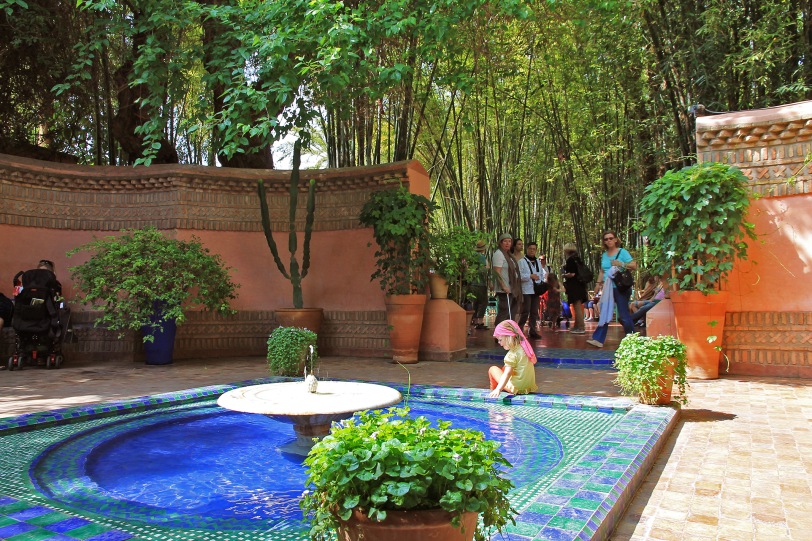 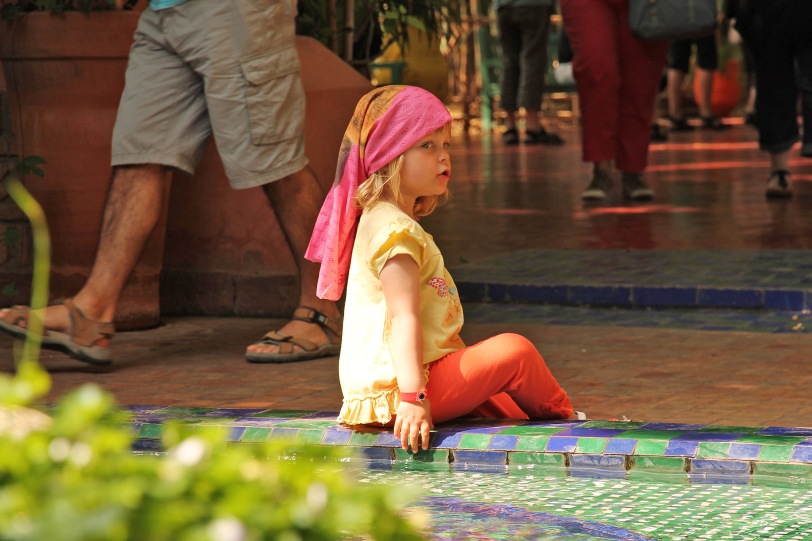 Febe in front of the camera… 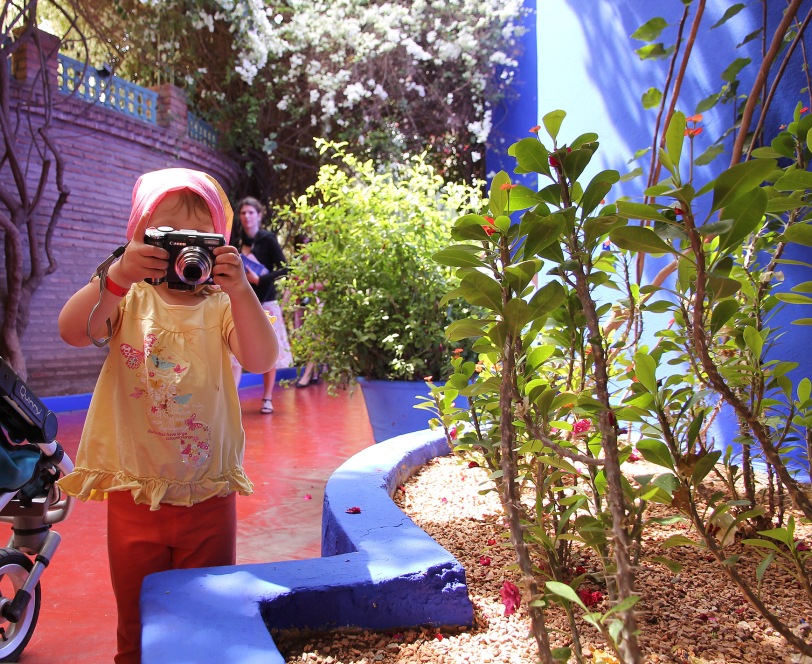 Febe behind the camera… 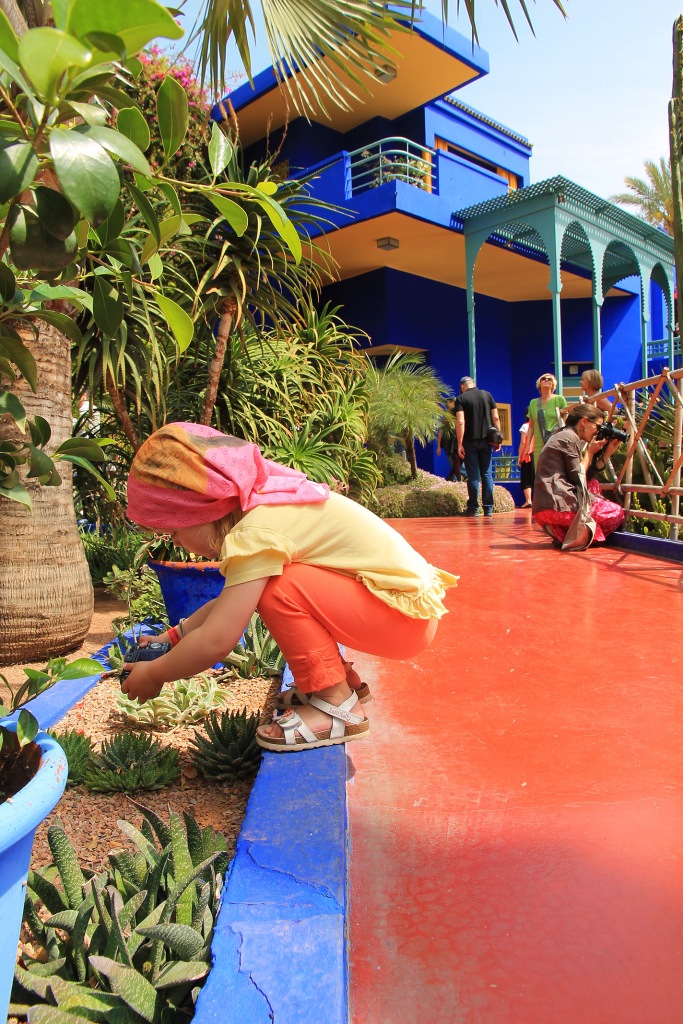 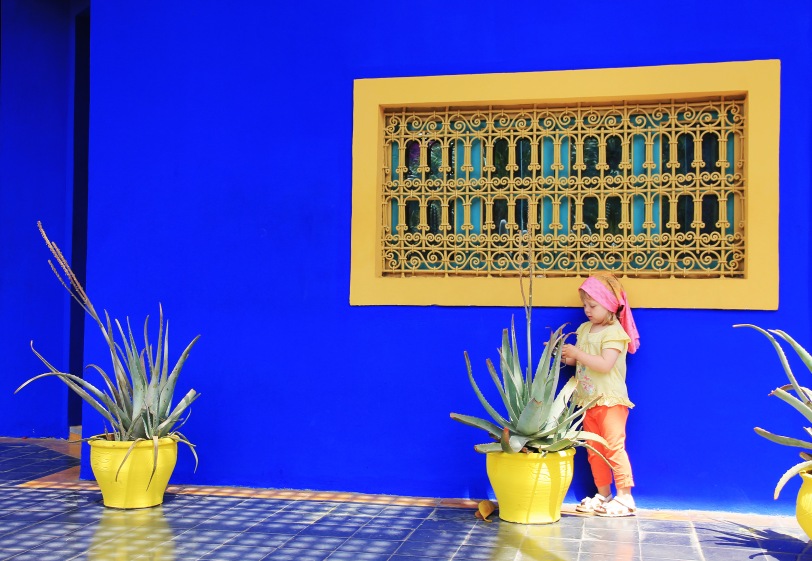 After our visit to the Majorelle garden, we took a kalesh (horse-drawn carriage) to the Djemaa El Fna, where our bus was waiting. The ride was quite relaxing and it was a nice way to get to know the city even better. 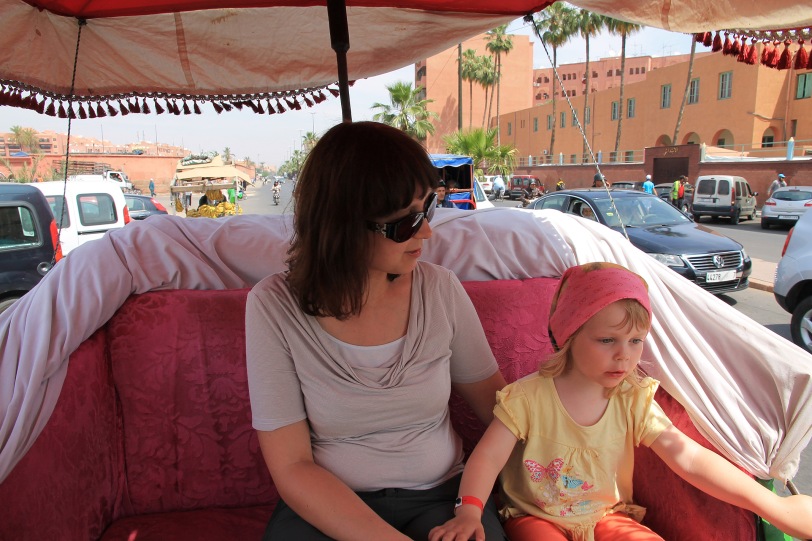 Because we still had half an hour until the bus arrived, we strolled around on the square, bought some souvenirs and took in the views and odours of the busy centre of Marrakesh for the last time. 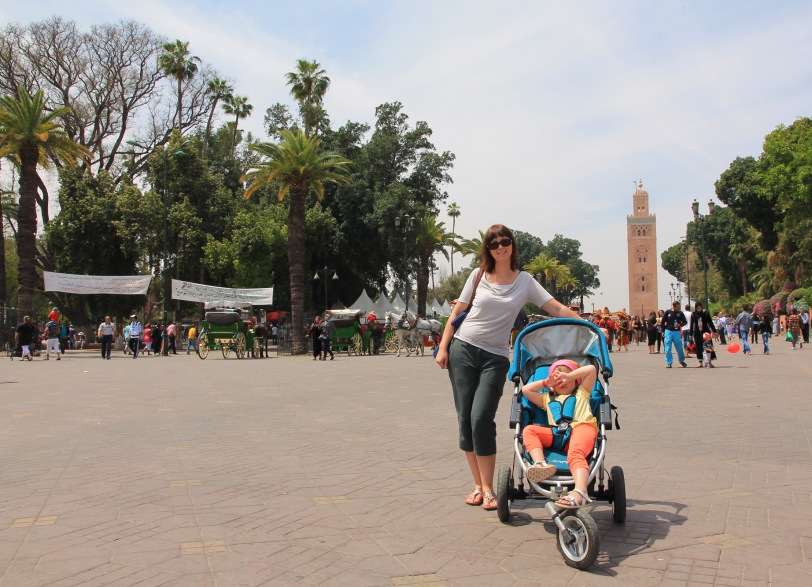 At Djemaa El Fna, with the Koutoubia mosque in the background

Unfortunately, the negative connotation that was forced upon us by the pushy snake charmers two days ago (see: https://ourworldheritagebe.wordpress.com/2014/06/26/day-four-marrakesh-highlights-part-2/) was confirmed when observing small monkeys all dressed up and being held by a metal chain. This type of animal abuse is just intolerable, but we still saw families who willingly posed with those poor guys. It gave us a very bad feeling and it’s a pitty we had to leave the city with that image in mind. 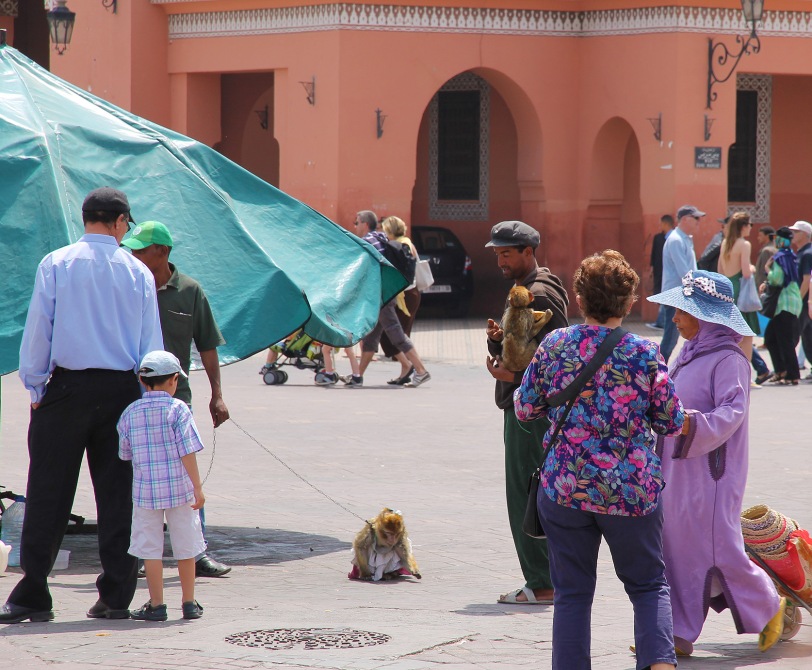 Being home early, there was more than enough time for pool fun with Febe, which we all enjoyed very much. 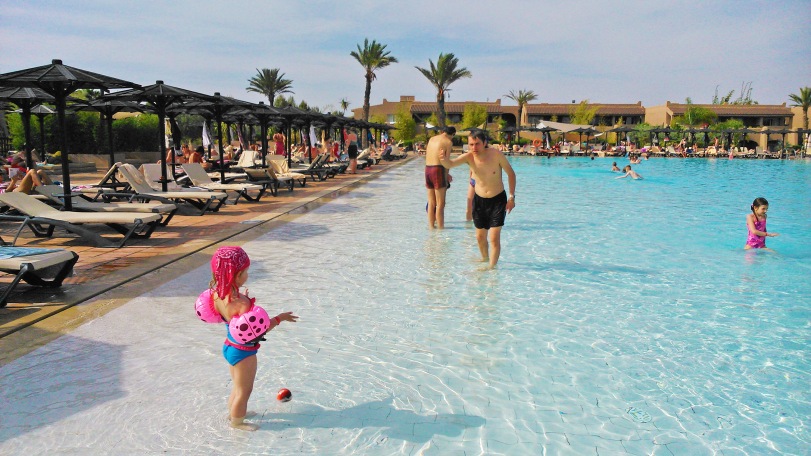 A noteworthy day in Morocco again!

4 thoughts on “Fashion, colour and photography: the Majorelle Garden”